skip to main | skip to sidebar

I am a Louisianian. That may not mean much to you. To you, it may just be another way I identify myself, like having dark hair or being of a certain height. But for me, and for everyone else classified as a Louisianian, it means a lot more. It means we cheer relentlessly for a professional football team that had a losing streak a mile wide until we finally won a Superbowl. It means we don’t know what in the world to do when it snows. It means we eat crawfish and pralines, drink Community coffee and Abita beer, and put Tony Chachere’s on just about everything. (And for the record, we just call it “Tony’s”.) But most importantly, it means we understand rebuilding. We have to...we do it just about every year. When you live in a hurricane path, that’s just a risk you take. Louisianians are a resilient people.

I am also a Nashvillian. This week marks the anniversary of my move to Nashville. I spent 3 years in Philadelphia and never felt as at home as I do here in Nashville. As I sat in traffic yesterday on I-40 after dropping my mom off at the airport, I started thinking about the similarities between Baton Rouge and Nashville and why these two places have always felt like home to me.

Over the past several days, I have watched my new home become so much like my original home. As my mom and I sat glued to the tv on Saturday watching the weather forecasts, it started to sink in. This storm was serious. We had seen it so many times in our own hometown that we could reasonably predict what would happen. On Sunday, our greatest fears for the city became a reality. But we never imagined what would follow in the next several days. Home after home filled up with water, the city’s historic buildings were bathed in dirty floodwater and the tourist hubs began to disappear as the water crept up farther and farther. And still, the story barely made the national news. It was an all-too-familiar situation.

In late August of 2008, Hurricane Gustav ripped through Baton Rouge, destroying homes and businesses and cars and lives. Like Nashville in the wake of the flood, the media graciously donated fifteen minutes to the “sad situation” in Baton Rouge and it was just as quickly brushed aside in favor of other news. But for 8 days, the city sat without power. The trees that once lined the beautiful streets of the capital city still lined the streets, but in a much sadder and more chaotic fashion. Debris was strewn about, cars were crushed and homes were roofless.

And yet, no one knew. Just a few years before, Hurricane Katrina had garnered more than her share of airtime. But she was different...she came with an abundance of crime and hate and anger and blame. Little (but equally as devastating) brother Gustav packed no such punch. In the aftermath of Gustav, neighbors pulled together to help each other out and clean up their streets. Church groups went from neighborhood to neighborhood offering to pick up debris and clean yards and driveways. Mayor Kip Holden was relentless in his pursuit to restore our city to its place and encouraged residents to lend a hand wherever they could, whether it was with their time or their money. In just a matter of a few months, no trace of a hurricane was left.

In the days since the flooding, I have seen Nashville pull together in that same exact manner. Just as Baton Rouge clung to the motto “We are BR”, Nashville is living up to “We are Nashville,” and with such radiance! This part, too, is familiar. Neighbors are helping neighbors, church groups are sending out volunteers in droves and Mayor Karl Dean is leading the charge to restore his city. There is very little crime resulting from the flood and no one is whining. People are just doing the only thing they know to do, supporting one another. Perhaps that’s why the national media is only just now picking up the story the way they should.

People helping themselves doesn’t garner big ratings. Communities pulling together to accomplish more in a day than major agencies accomplish in weeks doesn’t sell. Picking up the pieces and moving on doesn’t make the front page. But cities that repair themselves and hold their heads high come back. And they come back better than ever.

My heart aches for the people facing loss and devastation. But I am also filled with a sense of immense hope that we will all pull through this because of the faith this city has in God, in itself and in its people. My favorite quote is quite possibly more relevant now than ever before.

“When you come to the end of all the light you know and are forced to step off into the darkness, faith is knowing that one of two things will happen: Either there will be something solid for you to stand on or you will be given wings and taught to fly.”

Faith is knowing we will recover. So go ahead Nashville, spread your wings. Fly.
Posted by Eco-Prep at 2:06 PM 3 comments:

Recently, I've started expanding my "green thinking" to include not only WHAT I live with, but HOW I live with what I have. I have become enamored with the entire "Not So Big House" collection of books by Sarah Susanka.

I love the way Sarah looks at living spaces and the books are a great read. They also look fabulous on my coffee table and in my bookshelf. The collection covers everything from interior design to remodeling to outdoor living spaces. There is even a book called "The Not So Big Life" which has been added to my reading list. If you are interested in making your own life-footprint smaller, take a look at the NSB and see site for yourself here.
Posted by Eco-Prep at 5:39 PM 1 comment:

The Hiatus is Over...and this Tunic is FABULOUS!

Well hello again! First and foremost, I must apologize for the extended hiatus. What was originally intended to be a three- or four-day break from blogging turned into a lengthy vacation. I realized that I had lost a bit of the passion I once had for blogging and I needed to focus on some other things in my life. For the past month or so, I have debated coming back to the blog because I used to love it so but I didn't want to have to take another long break. After much contemplation, I realized that there are so many great eco-preppy products out there that the preppy blogging community deserves to know about, and I am honored to be able to share them all with you!!!

Things in our corner of the world are going really well. We are all adjusted to our new home in Nashville and the city has been wonderful! Work is great and things just keep getting better and better. Additionally, I am tweeting these days...a lot. It has become a fun little break for me a few times each day and I love the challenge of communicating in 140 characters or less. If the spirit so moves you, feel free to follow me! My name is ajdelaune.

As my first post back, I want to share with you this adorable tunic from Mountains of the Moon. The Edie Dress is perfect for spring and comes in black and cream, as well as maroon and black. 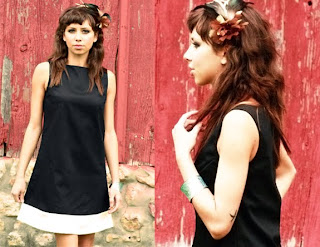 The dress is on sale right now for $48 and you can get it here.

Mountains of the Moon also has their Coco dress on sale right now. The dress is reminiscent of a Roman Holiday Audrey Hepburn and I have fallen madly in love with it! 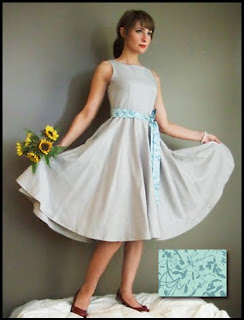 You can pick up this classic little number here.

And so, with that, I am back. The posts may not be as frequent as they once were, but they will be regular, I can assure you. Here's hoping you all have a most fabulous day!!!!
Posted by Eco-Prep at 3:26 PM 2 comments:

Black is the New Green

We all know that green is the new black. Everyone from eco-friendly celebs to green leaders have told us so. Even tshirts are telling us so! But has black also become the new green?

After browsing in Whole Body the other day, I came across Giovanni's D-tox system. I was initially skeptic of the organic coal-colored products but had a change of heart after reading the ingredients (activated charcoal, volcanic ash and super-antioxidants acai and gojo berry). The system is terrific and leaves my skin looking and feeling fantastic! 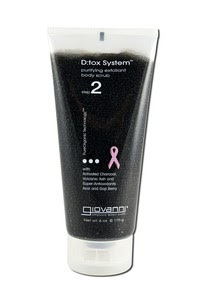 Labels: Everything else, Green goodies

Disney is undeniably one of the primary sources of inspiration for the 'tween set and the house that the Mouse built, with it's cute and wholesome shows and movies, has its own set of trendsetters. From fashion to music to causes, the channel's teen stars are definitely making waves. Recently, Disney unveiled its Friends for Change campaign. Spots air with regularity during and between shows and feature the It-girls and It-guys of the teen scene. The idea behind the campaign is the theory that a mass can always do more than just one person. Never have truer words been spoken! Going green is not just for the grownups anymore!

Labels: Everything else, Green links

Let's face it, stress happens. It happens to all of us, no matter how calm we are or how we try to avoid it. My favorite way to de-stress is to have a healthy dinner with a glass of wine, take a nice bubble bath, and fall into a super comfortable bed for a solid 8-hour slumber. Since the green movement has steadily spread to all corners, just about anything you could possibly want is now available in "green".

After a particularly stressful day, I love to prepare a quick dinner (or cheat and pick something up) from the organic section of my local grocer or the farmer's market. A glass of organic wine finishes the meal. If you can't find organic wine locally, order yourself a bottle or two from The Organic Wine Company. Check to make sure that your state allows alcohol shipments before you order, though.

The Green Glass Company has a wonderful array of eco-friendly glassware. From tumblers to goblets, they've got it all! I'm a big fan of the clear goblets!!!

Like so many of my fellow greenies, I have eco-sins that go against my passion for living a green life. Among them is my love of the bath. The area around my bathtub looks like an apothecary with all of the products I use, but I try to negate a bit of my impact on the earth by using organic products. Check out The Daily Green's article on green bath scrubs. 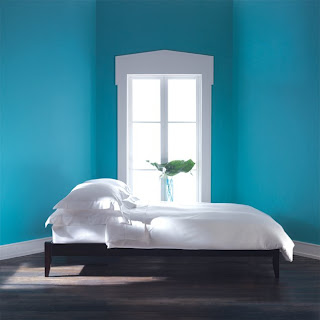 The Bella Pura sheets are available in 4 colors and come in queen and king sizes.

Nothing combats stress like a good night's sleep! So next time you're stressed, feed your body well, take some time for yourself and sleep it off!
Posted by Eco-Prep at 7:36 PM 1 comment: